Tomorrow will be the last full day of my show at the Edinburgh Ski Club.

It has been fantastic to have quite a large body of my work on show in one place again 2 years since my last solo. I’m glad to say the comments and feedback have been very positive from people who already know my work and the many who have come in out of the cold from the street to have a first look.

So if you are able to come along tomorrow or before 2pm on Wednesday 29th November when I’ll begin to take it down then please do come in.

(Please ignore the heavy breathing in the video!!) 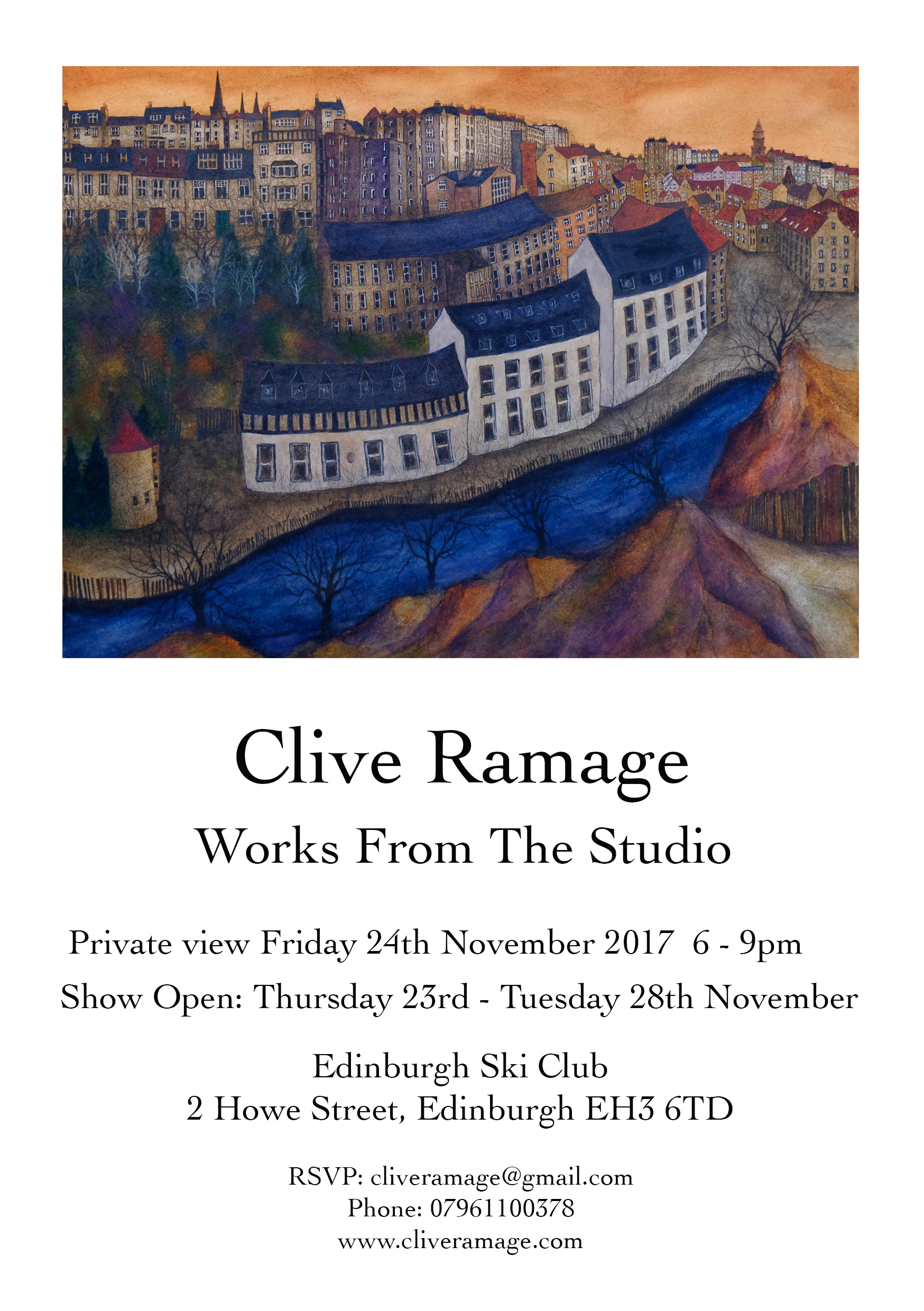 There will be a variety of recent watercolours, oil paintings and etchings on show. Proceeds from sales will go towards the costs of a 2 month residency at Castlemaine Press Print Workshop, Australia next year.

Please join me at the private view. I look forward to seeing you there!

Here’s some news about some upcoming exhibitions.

I’m happy to say I have a number of exhibitions in the pipeline for this year and this lot of newly framed work will be heading off to a gallery near you in the coming week. I’ll have some of this work in the Gallery at Fifty Five Spring show opening in Stonehaven on 4th March.

There’s also arTay during Perth Festival of the Arts which takes place in May, and either side of that I’ll have work in the Pittenweem Arts & Galleries Weekend along with fellow Fire Station resident artists in April, and at the Fire Station Creative gallery which will be happening around Open Studios time in June. I’ll post the specifics for all of these nearer the times.

In the meantime, I’ll be working mainly on new oil paintings and etchings, including lots based on my recent Cornwall, Devon and East Lothian trips in the campervan.

Just finished these 6 new paintings and will be taking to the framer in edinburgh later this week. They’re off to the Quay Gallery in Aberdour, Fife, in a week or 2 and each is a hand-coloured etching painted in a variety of ways.

The one on the right, The Old Town, Edinburgh, is 65x50cm and was only just finished this morning. It has a watercolour base for the sky and buildings and the hard work was done with my recently aquired Faber & Castell pastel pencils. These were bought on Ebay by accident as I thought I was getting watercolour pencils (I hit the bid button in a bit of a panic to win them). Anyway, I’m glad I did because they are fantastic!

The middle painting, the 4th in my Dean Village series, is maianly watercolour over etching with a little copper acrylic for some of the roofs. It’s roughly the same size as Old Town.

The other four paintings are done over 2 etchings of East Neuk scenes. Again, watercolour base with pastel and gouache for the buildings.

If you have the time do go to the Quay Gallery in Aberdour. It’s a beautiful gallery and just happens to be in one of the loveliest seaside towns in Scotland. But wait a week or two!!

The past few weeks have been extremely busy what with deadlines for various exhibitions, including those organised by the RSA, the SSA, the National Original Print Exhibition and the International Print Biennial. On top of that, my work has been included in 2 exhibitions in support of Maggies Cancer Care and the St Columbas Hospice in Edinburgh. I was delighted to have sold 4 large works in these, raising over £1500 in the process to share between these two deserving causes.

July will hopefully prove to be just as busy. But that’s over a week away and there’s lots of painting to be done now. I’m currently working on a series of small hand-painted etchings that have been sat in my drawers for the past couple of years gathering dust. The most recent of which has since been dusted with gold leaf and can be seen along with some of the others in the Watercolours & Etchings gallery. Some of these will be distributed to galleries in the next week or so. But if you like anything you see on my website do feel free to get in touch with me at cliveramage@gmail.com

I’ll also be working on the latest Dean Village hand-painted etching this week, which will be a blue and gold night time version (similar colours to that East Neuk etching mentioned above). This will be the 4th one of the 10 of these I have planned. I’m excited to see how this one and the 6 others will turn out. Watch this space as I’ll post updates here of how they are progressing. 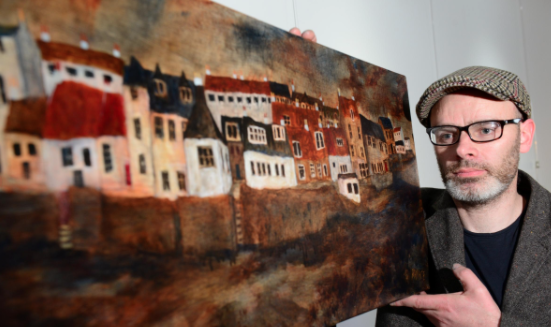 Here’s a map of all the Scottish lighthouses that I found at Ardnamurchan Point. There’s a lot of them! Almost 100 and pretty much all built by the Stevenson family within 100 years from the first (the Bell Rock) which was finished in 1810. I hope to get to as many as possible over the next few months as part of my project, The Lights That Never Go Out, An Artistic Odyssey From Muckle Flugga To The Mull of Galloway.

So after a day spent washing clothes and repacking the campervan after the Easter trip to the west coast, I’m off again to spend the next few days and nights sketching and photographing the lighthouses between Montrose and Fraserburgh. Tonight I’m hoping for a clear and starry sky (ie. no fog horn!) spent at the foot of Rattray Head.

I have 4 small new paintings in this exhibition. Click here to see them