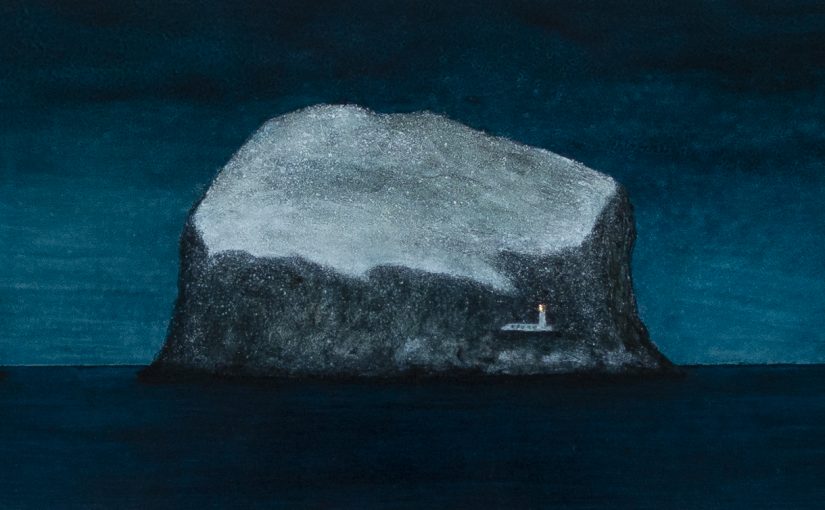 I have these two large pictures for sale at Gallery Heinzel’s upcoming Winter Show. Opens on the 9th Nov and runs until March 2020.

Three Views of The Bass Rock

The above painting has been over a year in the making. It glows and looks great in this frame with non-reflect art glass. The tiniest touch of gold leaf adds a very subtle beam and sparkle to each of the lighthouses. I’d liked to have kept this one for myself, but needs must!

Non-reflective glass allows more light and colour to bounce back from the picture rather than off the glass. This also means there’s no annoying reflections that prevent you seeing the picture properly. It’s very expensive but well worth the money and I’ll be using it more from now on.

This Harvest Moon etching is the 3rd variation I’ve made from a single copper plate. This edition is the result of a seemingly never-ending series of painful and time consuming trials with various ink colours (each pigment having its own peculiarities which can make or break a picture). I’m finally happy with this combination. Fellow printmakers have asked how I got the blackest ink and palest orange together without a gap or mixing the two. The simple answer is with great difficulty, as both colours are wiped onto (and off) the plate together for a single pressing. For every successful print two others went in the bin. This is by far the most difficult print I’ve ever made!

This is number 9/20 and is framed and available at the gallery, but there are more unframed copies available. I also have some Super Moons and only a very few Blue Moons left for sale. Contact Gallery Heinzel or myself directly if interested.

The show opens with a preview between 11-2pm at Gallery Heinzel this coming Saturday.

This month I’m showing some of my work alongside 5 of Scotland’s finest and best-loved landscape and architecture specialists in a show at the excellent Fidra Fine Art gallery in Gullane. 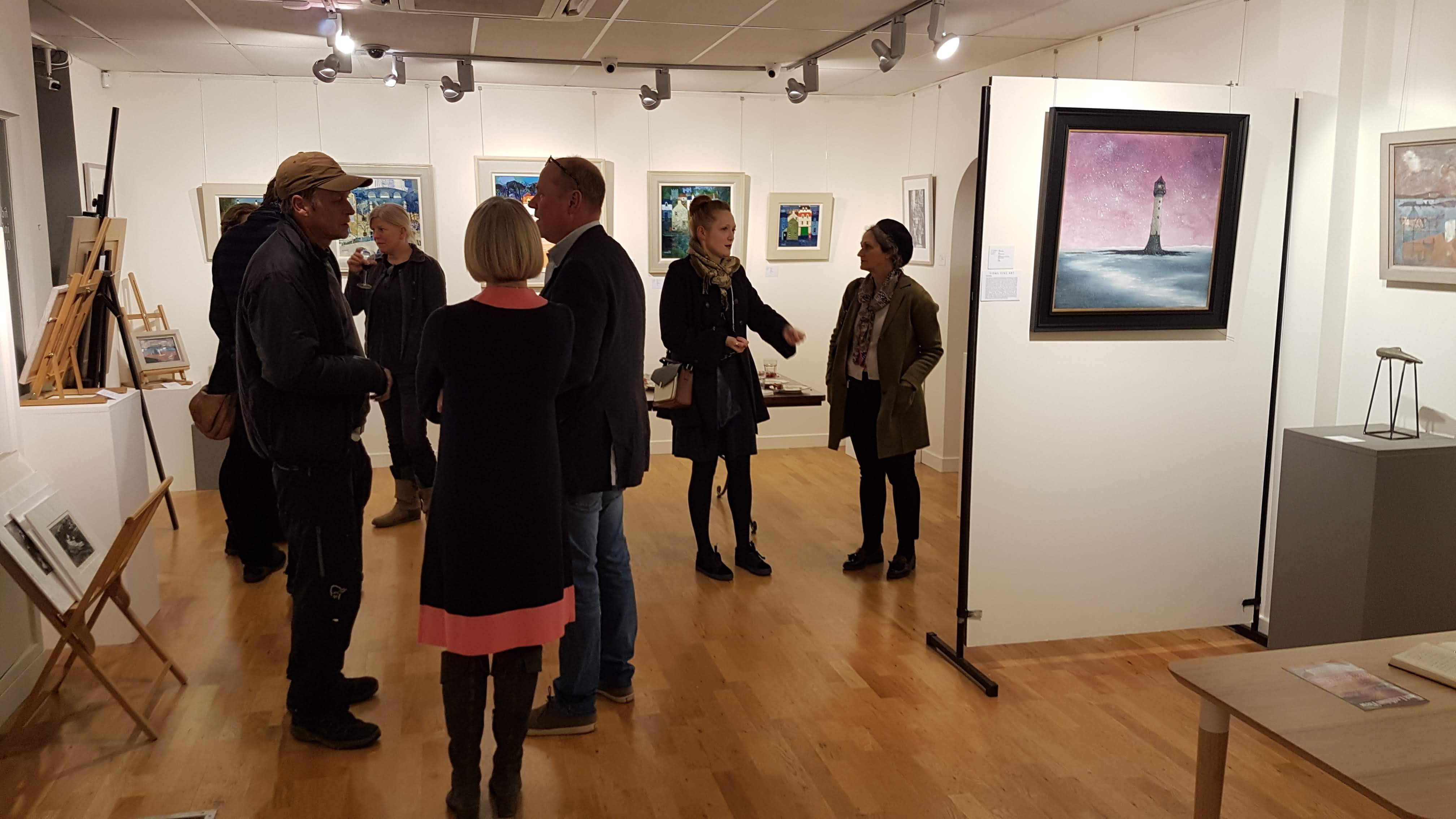 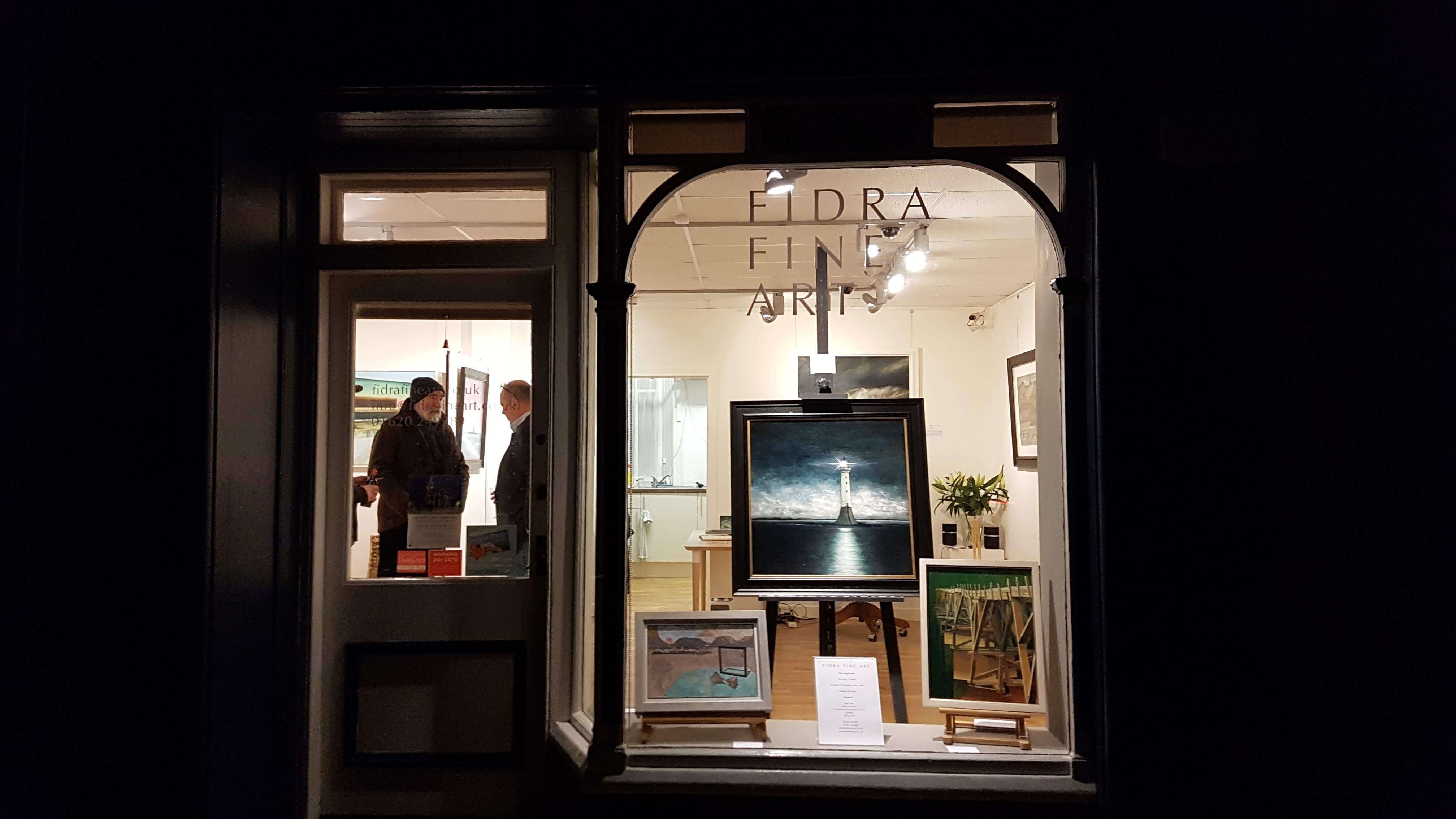 Along with the 6 paintings below (all of which have been recently completed and were done especially for this show), I will have a few of my etchings included in what looks to be a really interesting exhibition. The show opens at Fidra Fine Art in Gullane this Saturday 25th Feb.

The other 5 artists taking part are George Birrell, Ann Cowan, Amy Dennis, Ann Oram and Allan J. Robertson. Though we’re all inspired by architecture, each of us has our own very distinct style and employ different creative techniques to create our work.

So if you happen to be in East Lothian between 26th Jan and 24 Feb then go along for a look (closed Mondays). I’ll be at the preview night this Friday (6-8pm), as will some of the other artists showing, so I’ll maybe see you at that.

I’m delighted that my latest Dean Village hand-painted etching (Sunset) has been accepted to be exhibited at the Royal Scottish Academy Annual Open 2017.  It’s the 4th in a series of 10, each of which depicts the scene at a different time of day or season.

I’m especially pleased that this painting was accepted as I think it it’s the best piece of work I have done to date. It’s certainly the one I’m most satisfied with, insofar as it’s the closest I’ve gotten to achieving what I had in mind when I began the series last year. I’m also really pleased to have work in this particular RSA Open as it’s on during the Edinburgh Festival, so it’s going to be very busy.

I won’t make it to the opening of the exhibition unfortunately, but I’ll look forward to seeing the exhibition when I return from my summer holiday. I’m off to Belgium and Holland to get up close and personal with all my favourite paintings by artists like Bosch, Brueghel, Avercamp, Rembrandt and Vermeer. I’m especially looking forward to going back to the Rijksmuseum which was mostly closed for refurbishment the last time I visited, so I only saw a fraction of the artworks they normally have on show.

I’m currently reading the weighty Van Gogh, The Life tome and so this is also going to be a bit of an artistic pilgrimage to the places where he lived, worked and painted in those 2 countries. I’m hoping to come back brimming with ideas and inspiration and, despite the huge amount of anticipation I have for going on this trip, I’m already looking forward to getting back to work when I return.

I’ll try and post a few pictures from my trip here and on my Instagram page, so watch this space.

On another note, I just delivered a batch of etchings and paintings to The Coach House Gallery in Pittenweem, which will be on show there during the Pittenweem Art Festival.  So drop in for a look if you’re planning a visit (which runs between 5-12th August). And if you haven’t been to Pittenweem or the festival before then it’s well worth the trip. The village is stunning and the interiors of some of the houses perched on the hill above the harbour are well worth a visit in their own right. There’s over 100 artists showing, as well as music and other events so there’s plenty to see and do. 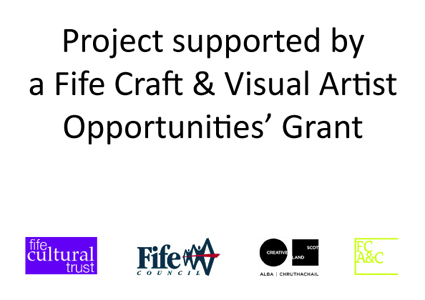