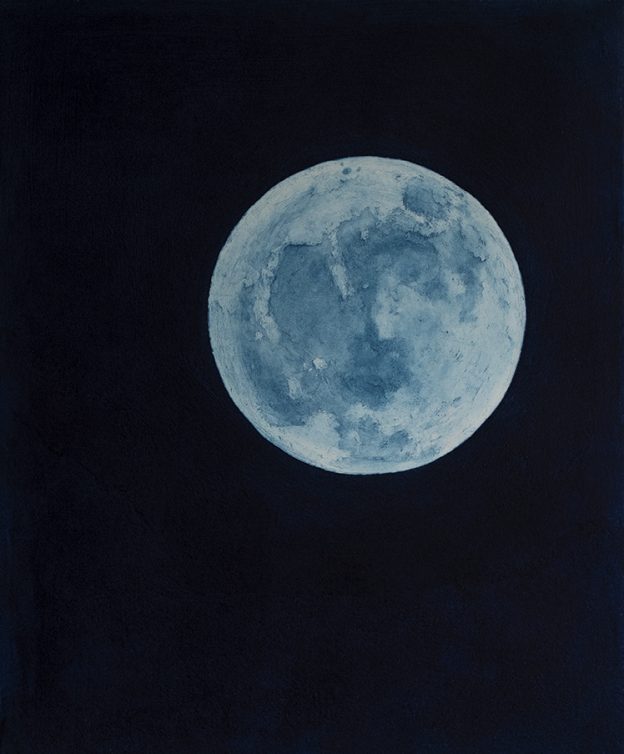 I love to see how the moon appears to change colour, size and character as it moves through the sky on its nightly arc. For me, the moon is a thing of ever changing beauty, mystery and inspiration.

But where I am now it’s a cold, drizzly November night and unfortunately there’s no moon to see at all as yet, though she is up there in all her glory. So here’s one I made earlier. Inspired by a moonlit night in Marrakech 8 years ago.

I remember being mesmerised watching it rise slowly and lazily above the flat-roofed souks of the Djemaa El Fna in Marrakech. It was a clear late-November night, but the town’s main square was as busy and colourful as I’d heard it always is. Above the seething masses of lost-looking tourists, locals on the make, donkeys and carts, charmers and snakes, children begging, children fighting, shopkeepers bartering and the constant barrage of mopeds and bicycles, horses and goats, the moon’s bright glow cast a beguiling spell over my first Moroccan night. The warm breath of camels condensed then wafted up on the chilly breeze that had begun to sweep down from the High Atlas mountains 30 miles away. Pungent aromas steamed from cauldrons filled to the brim with earthy-tasting snails for curious tourists to try. Spicey flavours sizzled from market stall tagines and exotic vapours oozed out from deep inside the crowded souks. Here I was, only 4 hours after leaving Scotland where the same full moon cast a very different spell across the icy land that would soon be blanketed in deep and heavy snow for over a month.

And a quarter of a million miles above us, indifferent to the bustling world below, the moon appeared frozen in the sky. Familiar features intoned with the cool transparent hues of Prussian Blue, spread thin across a face of brilliant white. And as I looked up, she appeared to look down, watching everyone everywhere that ever was or ever will be. And in turn, each tiny, insignificant character continued to play out their roles, heads down in the darkening night.