And here’s the view from my lovely but chilly studio this snowy morning.

Just a reminder that I am at my studio again until 4pm, if you fancy dropping by and brightening up this dreary Sunday afternoon.

I’ve decided to throw open my medieval studio door again this weekend, but it’ll be on Sunday instead of Saturday. Hopefully that means a few more folk who couldn’t make it last time can do so this time round. So please come along between 11am and 4pm for a final chance to pick up a great bargain limited edition etching or painting before Christmas!!

Yesterday’s open studio day turned out to be fantastic in many ways. I met some lovely new people who made the extra effort to climb all those stairs to my studio and, thankfully, their thoughts and impressions of my work were very positive – always good to hear! It was also great to catch up with a few old friends too.

As well as being an opportunity to sell and show my work to new clients, the viewing also provided me with a chance to see a lot of the work I’ve been doing over the last couple of years framed and hung together as a collection, instead of being shipped off to various galleries, where there is often little opportunity to see that or to get a feel for how it’s all going or any feedback from clients. That was very useful, as sometimes it’s difficult for me to see the cohesion that exists between the individual pieces I’m working on at any given time. This is particularly the case with the etchings, as it can take a pretty long time to complete the whole process of making them and I usually like to work on just the one or two at a time. I think it all worked well together as a whole though, and seeing it all together gave me a few ideas for new pieces to add to my series of etchings and paintings.

I enjoyed the whole experience so much I will be doing it all again this coming Sunday. So if you couldn’t make it this time, please come along between 11-4pm at the Abbot House!

So after a very long but productive week and a successful day yesterday, I decided to crack open the gluhwein and sample the Christmas festivities on offer at Edinburgh’s Winter Wonderland. I feel very lucky to have what I think is probably the most beautiful city in the world – especially at Christmas – right on my doorstep. And what artist could fail to be inspired by scenes such is this!

Even if I do say so myself!!

I have a few pieces in the loverly Gallery Heinzel in Aberdeen this winter. Have a look at them here

In the meantime, preparations are going well for my own open studio day tomorrow from 11-4pm at the Abbot House. It would be lovely to meet you if you’re in the Dunfermline area! I’ll post a few photos when the job is finally done this evening.

Come along to my studio this Saturday between 11-4pm too see some of my and my fellow artists’ work at the Abbot House. Just follow the signs and keep going up!

Looking forward to seeing you there! 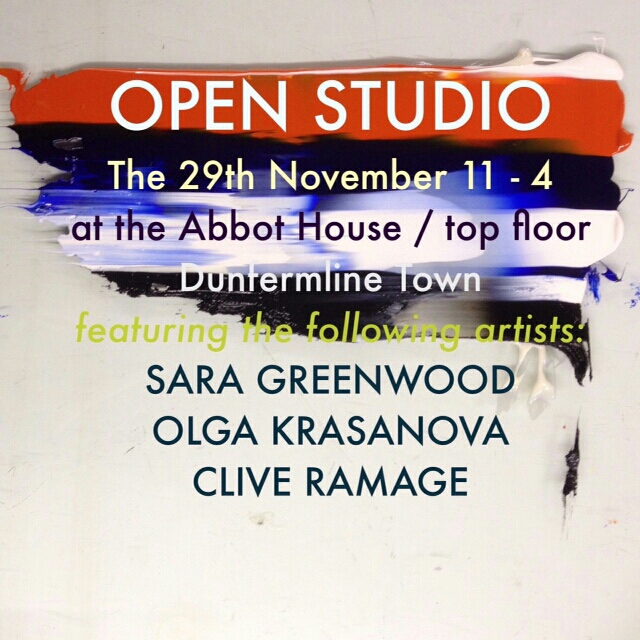 Late last night, on the way home from Edinburgh, I ran over and killed a fox. It had suddenly appeared as a sillouette in my headlights; like the idea of a fox conjured up by my weary mind on the dark road. Then it was gone. I couldn’t stop on the duel carraigeway as there was traffic behind me. I felt shaken and distraught. I just killed something!

I love foxes. I once spent a magical hour watching a playful pup dancing on the graveyard lights in St Cuthbert’s church in Edinburgh. It followed me to the cemetry gates where I had to shoo it away, as it might have followed me out onto the street and all the way home. I went to sleep thinking about that fox and how fragile life is. One second it is there, animated and full of spirit. The next it can be gone, like it never existed. I’m not religious, but I began to think of the spirit of the fox and all foxes and hoped that maybe I had set this one free. Poor consolation, perhaps!

Of course, I realise that killing this wild animal was an unavoidable accident. And I know we sometimes look for meanings in these situations, whether they exist or not, probably for our own comfort. This morning I was still upset and felt a need for that comfort and meaning. So I read about the nature of foxes and their use symbols in life and art. I learned that they hunt with their entire body, head to tail, stretched out, poised and pointed like an arrow; focussed only on one thing, their target. This is exactly how the fox appeared to me for that split second in the headlights. It must have been hunting. In art, the fox is often used as a symbol for inspiration and the emergence of ideas. This reminded me of one of my favourite poems, The Thought Fox, by Ted Hughes. His fox took him from staring down in frustration at the blank page on his desk to writing one of the best poems in the English language. I’m not expecting my poor fox to do the same for me, but I do feel more inspired today than I did yesterday. And hopefully I’ll be a little more focussed in my life and work in future too.

So Mr Fox, if you are out there somewhere, thank you for that!

The past week or so I have travelled the length and breadth of the country sorting out frames and delivering my work to various galleries in time for their Christmas shows. It’s all been a bit exhausting, though it’s always great to get the studio and my flat back to being a home and not something that resembels Edinburgh Arts back storeroom! So come the end of the week, all I had to get through before getting away in my campervan for a much needed holiday in Wales was a long day of demonstrating printing techniques to the Art Fair visitors. The fact that wine was literally flowing freely the evening before at the preview meant I had to get throuogh the day with a raging hangover, while keeping my spirits high and smiling like a Blue Peter presenter! I needn’t have worried though. I was having so much fun that the time just flew by! Our Fife/Dunfermline Printmakers stand seemed to be a big hit with the punters, and at one point we had quite a cue waiting to take a turn at printmaking. I had lots of time too to wander around and chat to many of the gallery owners showing there, and I ended up making quite a lot of connections and possible future gallery partners.

What turned out to be a wonderful day finished with another free bar and a casino night as we celebrated the 10th anniversary of the Edinburgh Art Fair with all the other exhibitors. I have to admit that my fellow printmakers Jai, Gordon, and I made the most of that!

So I’m heading off to Wales now, nursing yet another hangover, but with a warm possibly whiskey-induced glow inside. All the major pre-Christmas work is done so it’s time to get back to doing what I love most, travelling and finding lots of new places to inspire the next batch of paintings and prints.

Here’s a couple of new prints I’ve just finished. Dunnotter Castle in particular is quite different from what I’ve been doing for the past couple of years, but I have loved the painterly method and the scratchy effects you get from using sugarlift, which is how I did this plate. Picasso invented this style of etching where you paint or use a fine nibbed pen to draw a suger solution onto the metal, then once it’s dry you cover the whole plate with straw hat varnish before pouring hot water over it. The water and the heat makes the sugar solution expand and burst through the varnish in the areas you painted, exposing the bare plate.  The varnish elswhere on the plate protects it from the acid. You then clean the plate and add an aquatint (a fine spray of acrylic or resin-based dots which acts like a protective mesh screen) to it and begin the process of exposing it to the acid for the various tints. The tiny dots of aquatint again protect the metal beneath them allowing the acid to only etch the spaces in between, thus creating tone. I usually bathe the plate in 30 second dips for each tone, but it depends on the metal and the acid being used. It can be a wonderfully expressive technique and I’ve used it a few times now.

Edinburgh from Inverleith Park  below is another sugarlift etching. I’m looking forward to experimenting with it some more in the coming months.